It all started at Kruger’s Kermesse – a pre-season race on the bumpy dirt roads of Sauvie Island. I met my Green Submarine teammates for the first time — they introduced themselves and then quickly opened my eyes to the bike racing fashion faux-pas I had inadvertently been making as a novice cyclist. Apparently the commuter rack attached to Jake, my 2005 entry-level cyclocross bike by Kona, stuck out like a fanny pack on a middle-aged tourist in a Portland tattoo parlor. And that second set of brakes – so convenient for laid-back spins through the city?… pretty much as necessary as the long-sleeved shirt a Mormon woman wears under her tank top on a 100˚ day…. NOT SEXY.

Starting to get the picture, and admittedly allured by the idea of a bike that didn’t lift over barriers like a sack of boulders, I removed the rack. That one small change transitioned Jake from his baby-fat childhood to the awkward pre-teen stage. But this is not a comfortable time for Jake…or for me. I graduated to Cat B’s this year, and it already feels eerily similar to my first few months of high school: none of the cool girls have a triple chain ring or a double set of brakes (nor do they keep their shoes on with duct tape). They know how to get the mud stains off their jerseys, and they own more than a single kit. They re-mount fluidly and some even ride single speed and run tubular tires (which I assume means they know how to install and maintain them – badass)! What have I gotten myself into?! It’s an intimidating situation, and just the thought of another race makes me start sweating.

It’s also hands down the most (painfully) enjoyable sport I’ve picked up as an adult athlete. I know I want to race cyclocross next year, the year after, and each year forward until my body screams for me to stop loud enough that I actually comply. That being said… I want a big-kid bike.

Removing the commuter rack sent Jake into adolescence, but he’s got a ways to go before he can stand wheel-to-wheel with his peers and not feel the sting of insecurity. Which is why he signed up for Extreme Makeover – Bike Edition. Jake’s makover will begin with the replacement of his old, heavy, crappy wheels with a higher-grade and stiffer wheelset, which will reduce rotational weight and improve acceleration. Once funds have been secured for future procedures Jake will also acquire a carbon fork and a compact double (or maybe single!) chain ring. At some point in time he will also undergo a redundant-brake system removal, maybe even upgrade to disc brakes, and get a higher quality bottom bracket.

I am excited to witness Jake’s transition to maturity, and will be sure to update you on his post-op condition as his makeover evolves.

PS If you would like to be a part of Jake’s makover team please send me an e-mail. 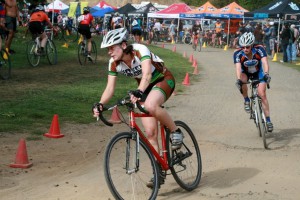 Jill with Jake in his awkward adolescent stage.